Supporting a growing workforce and a wide range of businesses, Sandia National Laboratories contributed a record $3.9 billion to the economy in fiscal year 2021. That’s about $139 million compared to the previous year. Expenses include labor, subcontracts, purchases, and other expenses.

“We are proud of the story these numbers tell,” said Scott Aeilts, Associate Director of Laboratories, referring to the new 2021 Sandia. Economic Impact Brochure. “Sandia continues to grow in terms of employment and spending, and we are committed to working with businesses – especially small businesses – to support national security goals.”

Of all outsourcing-related payments, totaling nearly $1.37 billion, more than $838 million — or about 61% — went to small businesses. Total subcontract payments increased by $37 million over the prior year.

Nearly 35% of all outsourcing-related payments in fiscal year 2021 benefited New Mexico businesses. Sandia also paid the State of New Mexico more than $106 million in gross receipts taxes, up nearly $9 million from the prior year.

Sandia spent about $485 million with New Mexico companies in the 2021 fiscal year that ended Sept. 30. This includes $9.5 million in procurement purchases and $475 million in in-state subcontracts. Of New Mexico’s subcontracts, more than $360 million — or about 76% — went to small businesses.

“Various small business vendors are critical to the success of Sandia Labs’ national security missions,” said James Peery, Director of Labs. “Their skills and hard work combined with ours are a powerful force in bringing cutting-edge technology to market. We are committed to partnering with small businesses and working together to promote innovation, achieve common goals and strengthen local and national economies.

In addition to expenses, lab employment increased by more than 460 jobs in fiscal year 2020 and more than $2.3 billion was spent on labor and non-life-related payments. outsourcing. Sandia’s total employment across all sites is nearly 15,000, with the largest lab site, located in Albuquerque, employing nearly 12,300 people.

Sandia has awarded the largest subcontract ever to a small business 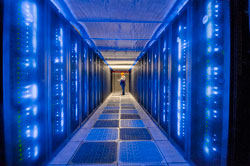 “The subcontract with Encantado is one way Sandia demonstrates its commitment to small business,” said Paul Sedillo, Sandia’s small business program manager. “We are proud of how smoothly the contract transition went. By replacing multiple contracts with one, IT efficiency has increased across Sandia. »

As part of the contract, the company provides Sandia with IT and telecommunications support for all lab employees. This includes end-user help desk and support services, cloud-based solutions, software development, IT infrastructure services, data science, and analytics and automation engineering. The company employs nearly 500 people in New Mexico.

“As a permanent resident of New Mexico, community stewardship is important to me and a core value for Encantado,” said Encantado CEO Rodger Jones. “Encantado promotes and encourages its staff members to participate in local professional and community organizations. Additionally, we take a percentage of our revenue to fund a local nonprofit, the Encantado Foundation, which supports STEM-based education and other programs across the state.

The non-profit organization supports community needs, aims to train the next generation of leaders, and foster learning through programs in the Albuquerque area.

During the past fiscal year, 131 new patents were granted for Sandia technologies, 238 patent applications were filed and 564 commercial licenses were active.

Sandia continued to support K-12 educational success and family stability programs to address some of the biggest challenges facing Albuquerque and Livermore. In calendar year 2021, Sandia’s National Technology and Engineering Solutions contributed $1.4 million on behalf of Sandia to local communities, including $175,000 in the Livermore area.

“The past two years have challenged us all due to the continuing COVID-19 pandemic,” said Amy Tapia, Community Engagement Manager. “Sandia employees continue to show up to help our communities and it’s inspiring to witness that.”

The labs have met and exceeded small business goals for five consecutive years. Sandia is already on track to meet all targets set for fiscal year 2022. The Labs is focused on working with small businesses that fit the federal categories as Disadvantaged, Women-Owned, Veteran-Owned Small Businesses , owned by disabled veterans and small businesses in poor regions, HUBZone areas.

“Sandia is committed to supporting small businesses, and our teams are always thinking of new, creative ways to connect,” Sedillo said. “The past two years have been particularly difficult for many businesses during the pandemic, and we are doing what we can to ease the financial burdens.”

/Public release. This material from the original organization/authors may be ad hoc in nature, edited for clarity, style and length. The views and opinions expressed are those of the author or authors.View Full here.

It’s hard enough for companies to achieve their strategic goals; it’s even more difficult when employees don’t know what those goals are. Workers in small firms may be less aware of the strategic vision than their peers in larger firms, according to a new survey from Robert Half Management Resources. CFOs were asked, “In your […]

We’ve all been there – you pick up a new client, but you quickly find that they have no idea what your business is doing – let alone what they really expect from working with you. It’s the customer who pisses your employees off, takes all of your time, and makes you go to Tony […]

Hilary Centeleghe Head of Startup and Growth at GC Business Growth Hub.jpg ENTREPRENEURS based in Bolt who are ready to start a business or who may already be in the early stages of setting up a micro-business are invited to apply for a new, fully-funded support program designed to unlock their full business potential. Start […]